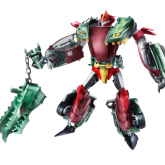 Nicknamed "Croc Out" by fans for the way it looks like Knock Out skinned an alligator for his new body armor.

With Megatron missing, Predaking running wild, and the other Predacons wreaking havoc all over Earth, Knock Out begins to think it might be high time to vacate the planet in favor of somewhere less occupied by dragons. Lucky for him, Shockwave seems to have the same idea. The Decepticon scientist comes to Knock Out looking for his expert help in packing up what remains of the destroyed cloning lab - including the final two Hyperevolution Chambers. Knock Out isn't entirely certain it's wise to be bringing cargo this dangerous with them - but he doesn't really care as long as Shockwave pays for his help by getting him off the planet.