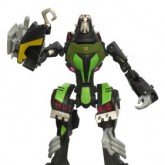 On May 16th, 2008, Derrick Wyatt one of the creators of Transformers Animated made a post on his blog about Lockdown, explaining the process behind the creation of the character's unique look and how it evolved into the final product. Wyatt explained that his original visualisation of the character, based on the script for "Thrill of the Hunt", was of a monstrous, Frankenstein's monster-esque robot made of parts looted from other Transformers. While that look changed a lot for the final product, some of the mismatched pilfered parts style remained.

A sleek stealth fighter, LOCKDOWN is a skilled hunter and tracker who can blend into nearly any environment. He lives for the hunt and for the thrill and challenge it provides. He has no strong allegiance to MEGATRON or the DECEPTICONS, but is more than willing to hire himself out as a Mercenary/Bounty Hunter.

Robot Mode Power: LOCKDOWN is outfitted with all kinds of high-tech weaponry befitting a robot hunter – bolos, snare nets, electronic stun darts (which can prevent mode changes), etc. He also can go into a Predator-like stealth mode for brief periods.