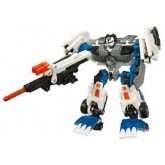 Longarm is by far the most annoying enemy in the Transformers Movie game. Unlike the toy whose crane is a part of his rifle, the game version of Longarm has the crane mounted on the back. Longarm's attack pattern consists solely of advancing toward you slowly with the crane whirling around, trashing anything else that gets in range. If you get too close, you get sent flying and take a lot of damage from it! The only way to break this attack is to throw something at him - guns have no effect on Longarm. This is only temporary, though, since after 2-3 hits, Longarm pops the crane out again and you have to repeat the whole process! He's a very common opponent too, to add insult to injury.

Longarm is a part of Arcee's strike force, brought to Earth to liberate it from Megaton. He's a bit of a pessimist, not entirely convinced that six Autobots (himself, Arcee, Elita-1, Armorhide, Skyblast and Strongarm) can triumph against a whole legion of Decepticons planetside. They're currently standing by on the moon awaiting a signal from Bumblebee and Ironhide to attack, counting on the element of surprise to give them an edge, not aware that their arrival has been noticed by Starscream!