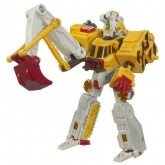 Cyber Key Code: d48m
Unlocked information from http://www.transformers.com:
In 1999, Japan introduced a new Transformers series – it was called Beast Wars Neo. There were a ton of figures in this line like a rabbit Transformer, a horse Transformer and even a penguin Transformer! But one of the most interesting in the line was Longrack – Longrack was a giraffe Transformer! His function was a Deputy Commander under an Optimus Prime character that turned into a Wooly Mammoth! This is the first time Longrack will turn into a vehicular mode!