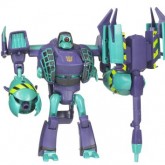 According to material published in issue #24 of the Transformers Collector's Club magazine, Lugnut is the consort of the Decepticon general Strika.

Lugnut's devastating punch attack was nicknamed the "Punch of Kill Everything" (or P.O.K.E. for short) by 2005 Boards member Beastbot X. The production team liked the idea so much that they decided to adopt it into the series somehow, and it was made canonical in IDW's Transformers Animated: The Arrival Issue #4.

LUGNUT is more a force of nature than a DECEPTICON. MEGATRON’s fiercely loyal but none-too-bright attack dog. He would gladly follow his leader into the depths of hell. Of the DECEPTICONS, only LUGNUT refuses to believe that MEGATRON is gone for good. When we first meet him, LUGNUT has devoted his life to preserving his beloved leader’s memory and vanquishing his foes. LUGNUT deems himself and any other DECEPTICON unworthy to take the mantle of leadership. Personality-wise, LUGNUT comes across as a cross between a pit bull, a Klingon and a manic street preacher.

Robot Mode Power: LUGNUT is incredibly strong, the Hulk to BULKHEAD’s Thing. He also carries a payload of mega-bombs and can spew liquid napalm with laser-like accuracy. But he much prefers to rip things apart with his bare hands.