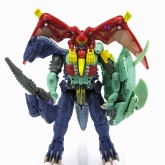 Magmatron was made up of three beast modes - Landsaur, Seasaur and Skysaur, which were based on the extinct Giganotosaurus, Elasmosaurus & Quetzalcoatlus respectively. Somewhat erroneously though, the instruction sheet refers to them as Raptor, Plesiosaur and Pteranodon.

The three beast modes could turn into a Fuzor form, dubbed the "Magmasaur". Also, while his bio makes him a Maximal, Magmatron was released as a Dinobot, and his Spark Crystals, unchanged from the Japanese release, were Predacon!

Magmatron is also unique in Transformers history for being the only US release Transformer to have the Japanese logo for Transformers on his box, in addition to Japanese text for the names of the modes and the "More than meets the eye!!" slogan.