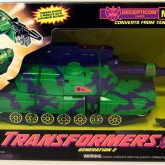 Megatron had a slightly different bio (and totally different motto) for his European release:

"Everything the Autobots have is rightly mine!"

Megatron is the ultimate tyrant. His genius and greed fuel his desire for absolute supremacy, and so he leads the Decepticons in a battle to overcome his arch enemies, the Autobots. Armed with lasers and missiles he fights for control, and in tank mode is an impenetrable force using cannons and explosives to invade the Autobot's territory.