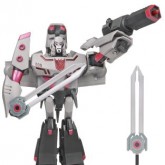 MEGATRON is a fierce, unyielding despot who sees himself as a freedom fighter. He sees the DECEPTICONS as an oppressed race suffering under the tyranny of the AUTOBOTS. The DECEPTICONS must survive by any means necessary. He takes extreme pleasure in the suffering of even a single Autobot. And MEGATRON does not care at all for the collateral damage known as humans who might happen to stand in his way. He has the zeal of a fanatic and demands the unquestioning loyalty of those who serve him.

Robot Mode Power: MEGATRON begins the series with only one power: the power to lie and manipulate Sumdac to repair and reconstruct him. Over time, the MEGATRON head will develop into a powerful psychokinetic who can control any machine. While the Cybertronian minds are too advanced to succumb to this ability, MEGATRON can control virtually any robot on Earth and the automated plants that construct them. In addition to this power, MEGATRON’s eventual robot body will be equipped with an assortment of laser cannons, sonic missiles and pulse blasters.

Megatron makes a very brief cameo in the the first issue of Titan UK's Transformers Animated comic. Looking very menacing (his face is hidden in shadow apart from the red glow of his eyes) Megatron implies he was behind the human supervillain, Quake-Maker, and the villain's subsequent escape.