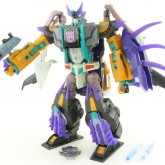 Unlocked information from www.transformers.com:
There is nothing Megatron loves more than power. First, he was after the Mini-Cons, then he was after all of the Energon in the world and now he's after the Cyber Planet Keys so he can rule the universe! In between all of those conquests, he found time to lead the Decepticons, battle the Autobots, get trapped inside Unicron, get a few new bodies AND eventually wear PARTS of Unicron as his armor!!! Talk about needing a vacation!!!