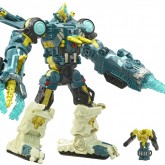 Cyber Key Code: us4r
Unlocked information from http://www.transformers.com:
Menasor, like Repugnus and others, is another creative use of an older Transformers name. The original Menasor was actually the name of of a giant, super-robot that was created when five other smaller robots combined to merge into the larger form. It’s fitting, since the current Cybertron version of Menasor is from Gigantion, the Giant Planet. The differences far outweigh the similarities – for even though the old Menasor was also a Decepticon, he was made up of 4 different racing vehicles and a semi-truck!!