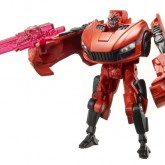 Although a Dark of the Moon character, he is being released as a part of the Transformers Prime Cyberverse series.

With his incredible talent for stealth, MIRAGE would be the ultimate spy. But he'd much rather be in the thick of a fight, moving silent and invisible through a melee to strike where the enemy is weakest. Powerful light-bending cells covering his armor allow him to become invisible for short periods of time, which makes him the perfect choice for striking at DECEPTICON commanders, even when they're ringed by guards. He enjoys his role on the battlefield, though some of the other AUTOBOTS don't fully trust him.