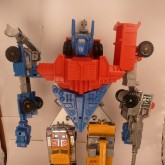 The Four Star Toy company. Made in 1985, a Taiwan based company which produced high quality knockoffs of the then current Transformers as well as some very unique transforming robots of their own. Under the name Transistor Robots, they produced versions of the Takara seekers, including variations, and insecticons. Some of the similarities were downright copyright infringement. It was painfully obvious that they started out with Takara's mold. BUT aside from making very good knockoffs, they made changes to the mold which make them very unique and highly sought after.
There were three jets with at least two of them with variations. The quality of these are remarkable close to Takara standards. The plastic does not feel cheap at all, although some tend to be loose in some areas and very tight in others. I would say that QC was not such an issue with this company as it was with Takara. The giftset has great artwork on the front of the box. The back of the box shows the individual combat modes as well as the robots. There is also a closeup of the combined mode, which considering I have never seen instructions for him is the only way I know how to combine him. The insert was styrofoam with a plastic cover inside the box.