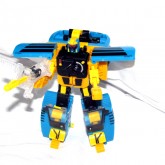 Because the collector's club exclusive would not be released until after Botcon 2008, this toy - only available to those taking one of the customizing classes - would be the first chance many fans had to own this Energon Hot Shot remold. The class also supplied some very cool Shatteredverse Autobot Intelligence Agency logos for him.