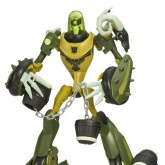 Oil Slick was designed entirely by Hasbro without the knowledge of the Cartoon Network team, hence, he was initially a non-show character. However, Marty Isenberg wrote a story for Transformers Animated Arrival that established some past for Oil Slick. Oil Slick is also set to appear in season 3 of Transformers Animated.

The TFCC club magazine also published a Generation 1 style tech spec for Oil Slick, which makes reference to his adaptation of weapons-grade cosmic rust as a gel (so probably a follow on to his initial experiments with a gas version of the plague in Animated Arrival #3). It also mentions that he is a genius specializing in chemical warfare.