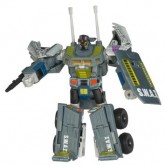 Bill (Hasbro's lead designer for 2008's new Universe line - 2005 Staff) chose ONSLAUGHT because he always loved his design and the two large signature barrels on the character’s back. The design team worked to retain that very characteristic silhouette in this new Ultra scale version of ONSLAUGHT. In choosing a vehicle mode, design went with a cool S.W.A.T. Urban assault vehicle to set it apart from the tanks in other TRANSFORMERS product lines. The vehicle choice and theme lent itself to the creation of a riot shield in robot mode. The final version does an excellent job recalling the G1 characters the design team grew up with.