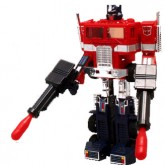 The European release of Generation 2 Optimus Prime had a slightly different bio (and totally different motto) to his American release:

"Even one Decepticon is one too many!"

Optimus Prime is the supreme leader of the Autobots. He has an intellect that matches his impressive size, and unequalled personal resources including: The Commander - the brain center who leads the Autobots; Scout Car - for spy missions against the Decepticons; and Autobot Headquarters - an armed combat deck with a robot for servicing and attack operations. Optimus Prime is the best equipped of all Autobots.