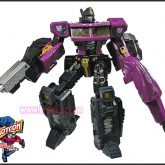 Optimus Prime is the ruthless leader of the Autobots, with an iron grip upon most of Cybertron. He enjoys keeping the corpses of his strongest foes in tanks lining the main hallway to his personal smelting pool where he enjoys torturing his captured opponents before killing them. He keeps the corpses of other victims strung up on the ceiling of this chamber and talks to them, and also acts as though he can hear their responses. According to this timeline's Megatron, Shattered Glass Optimus Prime is a mad genius who stumbled upon a secret so great that it drove him insane.

When the Classics Universe Cliffjumper arrived in the Shattered Glass Universe and met that universe's version of Rodimus, he was taken directly to Optimus Prime. Optimus was initially pleased to see Cliffjumper, assuming Cliffjumper to be his old trusted friend. When he was not, Optimus personally blasted Cliffjumper full of holes and had him dumped in the wastes of Cybertron's Rad Zone. This would prove to be a mistake, as later Cliffjumper would team up with the Shattered Glass Universe versions of the Decepticons, and with his glass gas formula they launched an attack on Optimus Prime's mothership, the Ark. During the battle, Optimus Prime wounded Megatron, but Optimus in turn was badly wounded by Megatron when he was distracted by Cliffjumper destroying the Ark's launch platform and in turn the Ark itself.