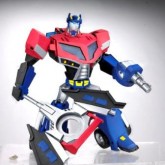 Optimus Prime's flight pack, used in "Endgame", is heavily inspired by the wings and gauntlets of Masterforce's God Ginrai. The initial, wingless, design takes some cues from Classic series Jetfire's fastpacks and the rocketpack lent to Optimus Prime by Sideswipe in the first episode of Transformers Generation 1, "More than Meets the Eye".

Optimus Prime appears in every episode of Transformers Animated, with the exception of "This is Why I Hate Machines", giving him the most appearances of all the regular cast members.

A young (by Cybertronian standards) commander of a ragtag and largely inexperienced group of misfit AUTOBOTS. He’s a born leader, a natural tactician, a dedicated never-say-die fighter and a master of improvisation in the face of adversity. Unassuming, humble, friendly and cheerful, Prime comes across as “The Bot Next Door.” He takes his mission and his men with the utmost seriousness, but is still able to relate to them as a regular guy. He’s not the kind of leader who needs to bark orders to command respect (besides, he’s got RATCHET to do that for him).

Robot Mode Power: OPTIMUS PRIME has the ability to change any part of his robotic body into a tool or gadget. His arsenal includes a jet-powered axe, grappler and fire extinguisher.

OPTIMUS PRIME is the young commander of a ragtag inexperienced group of AUTOBOTS. He’s a born leader, a never-say-die fighter, humble, friendly, and cheerful. OPTIMUS PRIME is not the kind of leader who needs to bark orders to command respect. He is usually the first to join the fight and the last to leave it putting himself before any member of his team.

ROBOT MODE POWER: "Battle Axe"
OPTIMUS PRIME'S main weapon is his battle axe. It is an ENERGON-based weapon that has multiple purposes. The axe blade can modify into a laser blade, it can also grow to cut large objects. The handle can grow in length for a pole-vault style attack, and the back of his axe has a built-in thruster for added lift and boost of great speeds.

OPTIMUS PRIME is a walking multi-utility knife with ability to convert any part of his robotic body to into a tool or gadget. His arms and legs can hyper-extend, he can whip grapples and swing his way around Detroit. OPTIMUS PRIME can also "spike" into any computer or machine to control it. AXE? SOMKESCREEN? HANG GLIDER? FIRE EXTINGUISHER? He has all of these tools and much more; but he isn’t just stocked with tools, he is clever about how he uses them.

Optimus is among the Autobots when Starscream and his clones attack the Autobot base in Transformers #17, and is helpless to escape until Grimlock and the Dinobots show up to save the day.

Optimus also appears in Titan's Transformers Animated #1, where he battles with the Quake-Maker and tries to get humans clear from the battle scene. Optimus is the only Autobot not immediately won over by the Autobot Afterburn who shows up during this battle, in part because Afterburn dodged a rock which went on to hit Optimus, but mostly because Afterburn seemed to have all the leadership qualities that Optimus himself feels he lacks.

This initial rivalry was never developed, however, due to the cancellation of Titan UK's Transformers Animated comic at issue #3.