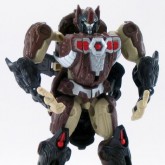 Cyber Key Code:d7s9
Unlocked information from http://www.transformers.com:
There is a legacy of action figure greatness that goes back ten years attached to this figure of Optimus Primal. Ten years ago, Kenner (which was owned by Hasbro) reinvented the Transformers brand as BEAST WARS! The story of Beast Wars tells the tale of futuristic descendants of the Autobots and Decepticons, now called Maximals and Predacons, and the continuing struggle for Cybertron. In this series, the ever-popular Optimus Prime was re-dubbed Optimus Primal and instead of a truck, he turned into a gorilla! This figure is a 10-year anniversary tribute to that classic story.