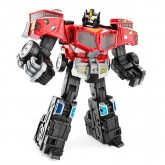 Cyber Key Code: lo9x
Unlocked information from http://www.transformers.com:
Optimus Prime. The name is synonymous with goodness, freedom and righteousness. Did you know that there have only been three main actors to ever voice the mighty Optimus prime since he was introduced in 1984. Peter Cullen provided the voice for Optimus Prime for the Generation 1 cartoon and movie. An actor named Neil Kaplan took over the role of Optimus Prime in a show called “Robots in Disguise” but in terms of sheer episodes – the actor Gary Chalk has been the most prolific. He was the voice of Optimus Primal in Beast Wars and Beast Machines and was the voice of Optimus Prime in Armada, Energon AND Cybertron! That’s a lot of episodes!