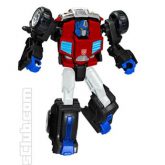 A slightly different bio for Pretender Optimus Prime was given on the order page for TCC Subscription Service 5.0:

Optimus Prime steps into the next Generation of Transformer evolution as a Double Pretender! As the strongest and wisest of the Autobots, Optimus is dedicated to protecting all life forms. Now he has added a whole new level to his considerable arsenal using Double Pretender technology!

Splits into three autonomous modules 1) His fearsome outer battle shell that combines cybernetically fused musculature and high-density Cybertronic alloy to truly dominate the field 2) The Commander Robot form which carries a high-density ion cannon and converts into an all-terrain vehicle capable of off-road travel in any environment 3) The Autobot cyborg partner Hi-Q, who transforms into both an aerial reconnaissance spy jet as well as a repeating particle beam cannon!

Decepticons should be wary of what Optimus can bring to the battlegrounds. With his new capabilities, Optimus Prime continues to be both a respected commander, and a feared warrior!