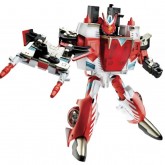 While Override is female, the Japanese version of the character, Nitro Convoy, is male. The reason for the change is that the networks wanted more female characters in the show.

(though to be honest, Override is already a homage to Minerva from the Masterforce series, one of the first female Transformers, so it's not a huge departure!)