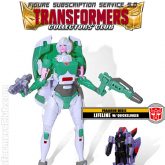 Lifeline had a different bio listed on the preorder page for the TCC Subscription Service 5.0:

Lifeline is one of the last remaining members of the Paradron Medic Corps, a group which famously shared an identical body-type amongst all its units. The near-pastel color scheme of the Medic Corps is based off of Rungian insights into the psychological status of most would-be patients, it's meant to put them at ease and offer less risk of accidental provocation. Lifeline does not fight and is a pacifist at spark, and she loathes that her programming drives her to accept patients injured from combat. Behind her ironic smile hides a detachment she’s developed for repairing bots who return to war. Naturally pragmatic, Lifeline repairs when possible and deactivates when not.

Lifeline and her practice are aided by the one-time Targetmaster Quickslinger who was one of the most rough-and-tumble robots in the Autobot military, taking on missions that defied her size and bearing. When the war seemed lost, she left Cybertron in search of a rumored lost colony world and a new mission for her life. She has achieved that goal as a loyal attendant to Lifeline.