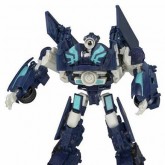 Payload is one of the less frequently seen opponents on the Transformers Movie video game, only appearing on the later levels. He is immune to ordinary firepower, and even shrugs off bits of scenery that are thrown at him. The only way to defeat him is to dodge out the way of his charge, at which time he'll pause and look around, leaving him open to a quick combo attack. Rinse, lather and repeat to defeat him.