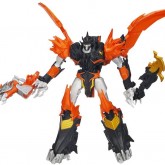 Tales of the Beast Hunters Chapter 6

Even as his blasters spew nova-hot flame across the quickly melting walls of the ancient starship, Predaking scans the cargo hold for signs of the powerful weapons the Autobots have come to find. So focused is he on holding off Optimus Prime and accomplishing his goal that he does not see the skulking form of Lazerback, flitting from shadow to shadow. No one does, in fact, and even as battle rages, the Predacon saboteur manages to plant enough explosives to utterly annihilate the derelict ship. When the charges detonate, all of the combatants are caught off guard. Predaking watches as his Autobot opponents escape with a precious few of the weapon crates in their possession. Only when he turns o make his on escape from the disintegrating starship does he see Megatron, surrounded by fire, plunge helplessly through the damaged floor, followed by hundreds of tons of debris.