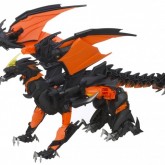 Predaking faces Optimus Prime across the desert expanse near the Autobot base, the Infernum Blade humming in his hand. He can see that the Autobot leader's new weaponry isn't fully activated, and he knows this is a battle he will win. "No more plots," he says. "No more grand plans. Megatron is gone. I will destroy you, wipe out your Autobots, and return Cybertron to the old ways." Then his sensors detect Optimus Prime receiving an incoming transmission - and power surges through the arsenal carried by the Autobot leader. Optimus Prime looks into the ancient predator's eyes and says, "this battle isn't over yet." And Predaking, so confident of victory only a moment ago, feels fear for the first time in millions of years.