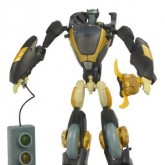 PROWL is the silent ninja of the team; he only speaks when he has to and it is as brief as possible. Of all the AUTOBOTS he is the most skilled in direct combat, he is a natural spy and can infiltrate without being detected. PROWL is the AUTOBOT of little talk and a lot of action.

ROBOT MODE POWER: "Shuriken"
PROWL'S main weapon are his throwing shuriken, bladed weapons that hurl through the air (always returning like a boomerang). He has a myriad of these at the base, and uses them when needed. Some are separated, super charged, others ENERGON based. PROWL also possesses powerful JUMP JETS that allow him short burst of flight.

* Master of Circuit-Su.
* Projects holograms for use as camouflage.
* Can use any object as a weapon.

PROWL is dark, sleek, agile, mysterious, and the ninja of the team. He speaks only when he has to, and even then as briefly as possible. Of all the AUTOBOTS, he’s the most skilled in direct combat. A natural spy, PROWL can infiltrate most any location unseen and unheard, so he’s used for reconnaissance more than any other Autobot. He is a bot of very little talk and much action. He’s unflappable, precise and has developed a keen interest in organic life.

Robot Mode Power: PROWL is an expert in camouflaging himself. He can turn virtually any object into a weapon. He also has keener senses—higher rez everything—than the other AUTOBOTS.

Prowl attends a basketball comic with Sari, Bulkhead and Afterburn in issue #3 of the Animated comic. As always, Prowl watches and observes, learning from the players. This pays off later on, when the Autobots confront the villainous Crossroad at Sumdac Tower - Prowl uses a strategy lifted right out of a basketball textbook to take down Crossroad's robots and Crossroad himself, with a little help from Afterburn.