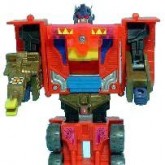 Pyro is one of the most notorious sufferers of gold plastic syndrome (GPS), the condition where the gold plastic was not properly mixed and is extremely brittle. Areas of gold plastic on Pyro include his feet, arms, waist (including the turntable that his upper torso rotates upon) the cannon on his vehicle mode / battle station, and his gun.

Obliterators backstory (used for both Autobot Pyro and the Decepticon Clench):

The Autobot and Decepticon troops still face each other over the devastated wastes of their age old battlefield. But now there is a new dimension to their endless contest - the Obliterators. Looming menacingly out of the mist come two towering warriors, both with super rapid firing missiles. The Autobot champion, Pyro, gives courage to his loyal followers and strikes terror into every Decepticon heart. Squaring up to his strength is the vast Clench - the pride of the Decepticon ranks.

So evenly matched are their amazing powers and astounding might that surely no-one can win this struggle? But someone must...