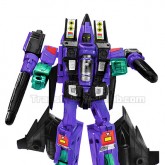 Like Cheetor, when Ramjet was first officially unveiled his product page featured an alternate version of his bio:

Ramjet doesn't know how he was exposed to Forestonite but he's definitely grateful for the tougher skin that he's grown in alternate mode. Now when he catches any hot shot pilot, human or Autobot, in his territory amongst the clouds, he has the capability of truly putting that pilot in a jam! Instead of locking on with his weapons, Ramjet engages his afterburners knowing that one strike from his strengthened nose cone will leave all of his adversaries toast!