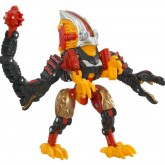 Cyber Key Code: = s48r
Unlocked information from http://www.transformers.com:
As with some of the other Transformers in the Cybertron toy line, this character shares it’s name and color scheme with a character from the original 1987 Generation 1 Transformers toy line. In his original incarnation, he was what was referred to as a “Monsterbot” and he was a huge, bug-like creature. Also, in his original form, Repugnus was an Autobot!