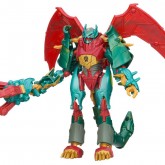 Even before she fully shakes off the disorientation of emerging fresh from the Hyperevolution Chamber, RIPCLAW can hear the soothing, strange voice of SHOCKWAVE. "PREDAKING is alive," he says, "but in danger. Enemies known as AUTOBOTS have stolen weapons powerful enough to harm even the king of the PREDACONS." RIPCLAW needs to hear nothing else - she blasts out of the lab and into the sky, turning her ultra-sensative snout into the wind, sniffing for any hint of the stolen seapons. Instead she finds LAZERBACK, smiling his cunning grin, "Whatever the DECEPTICONS have told you is a lie, my dear," he tells her. "PREDAKING is long gone. But that's no reason we shouldn't destroy the AUTOBOTS - and the DECEPTICONS along with them."