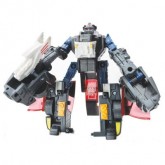 Unlocked information from www.transformers.com:
Similar to the Transformers: Cybertron toy Blurr, Runamuck is a throw-back design to a Transformer character from Generation One. Runamuck, back when he was introduced in 1986, was known as a Battle Charger. His original toy had a pull-back motor feature that when activated, would send his vehicle mode scooting across a flat surface. When he was transformed into robot mode, he could also roll across a floor by pulling back on his wheels. He had a near-identical Battle Charger partner named Runabout too and in the old Transformer comics, these two were hooligans and trouble makers— going so far as to spray paint graffiti on the Statue of Liberty!