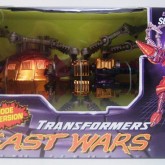 Early promotional images showed Scavenger with the name "Inferno" on his abdomen (where the name Scavenger ended up on the final version). His function and overall design suggest that this was intended to be a Transmetal upgrade to Inferno, though the name was changed for unknown reasons. He was still called Inferno when he was released in Japan.