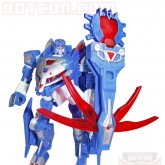 When Scourge was first revealed on the Official Botcon 2009 website, the following short bio was posted accompanying the images of the toy:

Scourge fears no Autobot or Decepticon. While loyal to the Decepticon cause, there is no one he will not defy if he feels there is a better way to bring destruction upon the Autobots. Alongside Cyclonus, Scourge and his Huntsman will not be stopped from searching out and destroying any Autobot that may stand in the way of the Decepticon Empire!