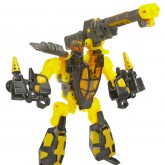 Cyber Key Code: s1j5
Unlocked information from http://www.transformers.com:
In the original treatment for the Transformers: Galaxy Force and TRANSFORMERS CYBERTRON cartoon, the Scrapmetal (or RUMBLOR as they are known in Japan) piloted by Coby was not in the script. It was much later in the development and script writing phase that this idea was put into the story. The Coby Scrapmetal was redesigned twice! Once as a bright white robot with the same head as the regular Scrapmetals, and then finally as the design seen in the animation.