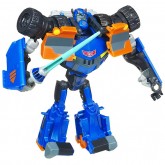 Sentinel Prime was assigned to act as drill sergeant to the new Autobots Jetfire and Jetstorm, much to his own distaste (he saw it as a demotion). As in the episode Autoboot Camp, he gave both Autobots names (initially, he called them both Jetfire, grumbling that it has been a few thousand stellar cycles since he had to do that job.)

True to form, when Jetfire and Jetstorm took off and triggered the anti-Decepticon autodefences, Sentinel tried to claim it as a test of the systems.

Once Jetfire and Jetstorm completed their training, Sentinel Prime was assigned to take them, and Jazz, to search for the escaped Autobot traitor, Waspinator.