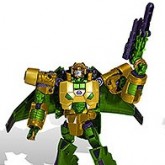 Serpent O.R.'s bio references Old Snake and the season 3 Generation 1 episode Only Human, and the origin of Serpentor from the episode Arise, Serpentor, Arise, in the G.I. Joe cartoon. In that episode Cobra used Sergeant Slaughter to fill in for a missing gap in their collection of military minds - given how Old Snake was formerly Cobra Commander, this means he has a bad run of luck when it comes to getting the minds of Joes uploaded into his super-soldiers.

The bio also suggests, at least as far as the Fun Publications Transformers Timelines extended continuity is concerned, that the Earth Defense Command featured in the third season of Generation 1 is a successor organization to G.I. Joe.