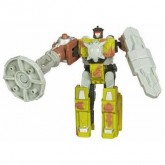 Signal Flare was a member of Ironhide's strike team in the distant past before the Movie. During a battle to liberate a Decepticon held fort, Signal Flare noticed that the guard towers were in fact unmanned cannon towers, which led Ironhide to demonstrate that nothing was as it seemed in that battle and the fortress was in fact only manned by a skeleton crew of Decepticons using autocannons to give the appearance of a fully-manned fort.