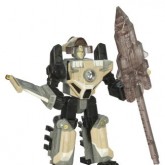 Skyblast is usually seen as a member of Autobot special assault groups along with Strongarm.

In the distant past before the Movie, Ironhide led Skyblast and other Autobot commandos in an operation to liberate a Deceptcon fort and rescue the Autobot Longview held within.
In the alternate universe "Twilight's Last Gleaming", Skyblast was a part of Arcee's team stationed on the moon awaiting the signal from Ironhide and Bumblebee to begin an operation to rid Earth of the tyrannical Megatron.