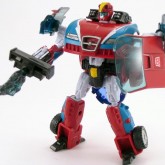 Smokescreen was the original intended name for the first deco of this mold, which was changed to Crosswise in order that this deco could be named Smokescreen, without using the same nice twice within the line.

Cyber key code was d4v6, the content unlocked was: