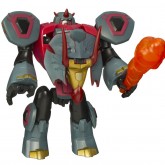 Due to limitations with the voice-acting budget, it is unlikely that we will ever hear Snarl speak, according to the Animated Writers Panel at Botcon 2008.

Snarl appears in two different Transformers Animated comic strips - the first, in the Transformers Movie comic, has Snarl in a speaking role (!) helping Sari to rescue the Autobots from Starscream and his clone army.

In his second UK comic appearance, in the Transformers Animated Comic, Snarl is infected with a rage (hate plague) virus and runs amok on Dinobot Island, seemingly stealing one of Ratchet's components and with Swoop defeating Grimlock. Snarl is cured when Afterburn deduces that Sari's Allspark Key is capable of curing the rage virus, while Bumblebee recovers the component which turns out to be a thermos of oil.