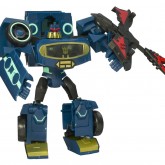 Laserbeak was an accessory designed by Hasbro and hence the team at Cartoon Network were not aware of it until after Soundwave's first appearance was already written. However, Laserbeak and Ratbat, who comes with Soundwave's repaint Electrostatic Soundwave, both appear in "Human Error".

In "Human Error" a giant, white Soundwave is also seen. This is possibly a homage to the "Sonic White" version of Takara's Music Label Soundwave, just as Electrostatic Soundwave is a homage to Soundwave's original repaint, Soundblaster.