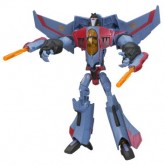 Motto: Don't try to deceive a DECEPTICON, AUTOBOT. We are the masters of deception.

STARSCREAM has always lived in MEGATRON'S shadows and it burns him constantly. He feels that he has done much more in the name of DECEPTICONS than MEGATRON, but he simply lacks the charisma to inspire others. STARSCREAM makes up for this shortcoming with lies, deceit, manipulation, and when that fails, MORE lies, deceit, and manipulation. STARSCREAM would love nothing more than to obtain the ALLSPARK for himself, win the devotion of fellow DECEPTICONS, and usurp MEGATRON'S rule. He is driven by jealousy, pure and simple.

ROBOT MODE POWER: "Nullray Cannons"
STARSCREAM'S main weapons are his arm cannons. He has incredible speed, maneuverability, and hovering capabilities. He flies rings around the AUTOBOTS. In addition, as his name indicates he creates a sonic scream that make powerful sonic blasts of sound that can send enemies spinning through the atmosphere.

While most of the DECEPTICONS viewed MEGATRON’s defeat and seemingly extinguished spark as a blow to their cause, STARSCREAM viewed it as an opportunity for his own cause. STARSCREAM has always lived in MEGATRON’s shadow, and it burns him constantly. He feels he’s done as much if not more than MEGATRON in the name of the DECEPTICON cause, but he simply lacks MEGATRON’s charisma to inspire others to follow him. STARSCREAM makes up for this failing with lies, deceit, manipulation and when all else fails…MORE lies, deceit and manipulation. STARSCREAM would love nothing more than to obtain the ALLSPARK himself, win the devotion of the DECEPTICONS and usurp MEGATRON’s rule. He’s driven by jealousy, pure and simple. A Machiavellian manipulator who never met an ally he wasn’t willing to stab in the back to get what he wants.

Robot Mode Power: STARSCREAM has incredible speed, maneuverability, and hovering capabilities. He can fly rings round the AUTOBOTS. In addition, he can affect a sonic scream and produce powerful blasts of sound that can send enemies spinning through the atmosphere.

Starscream - with his clone army - attacked and took over the Autobot base in Transformers #17. Starscream explained that Megatron was forever shutting down his hideouts wherever he made them, so he'd hide in base of Megatron's enemies, the last place he'd ever look. However, even though Starscream managed to defeat and capture all five Autobots, he overlooked Sari, which proved to be his downfall when Sari came back with the Dinobots to help retake the Autobot base and drive off Starscream and the clones.

(This story seems to contradict the idea that the Decepticons do not know where the Autobot base is. Then again, it also features a talking Swoop and Snarl so it is not considered in continuity with the rest of the series. Starscream's clones in this story are all exact copies of the original, with the same colors and similar personalities)

Starscream made a brief appearance in Titan UK's Transformers Animated #3. He was assisting the human, Roland Cross - aka Crossroad - in his bid to bring New Detroit to its knees by providing Cross with a piece of Megatron to power up Cross' gauntlets. Starscream's goal appeared to be bringing the Autobots to their knees - however, if he had any deeper goal, it was not explored in the comic due to its cancellation following the publication of this story.

During his time in captivity with the Elite Guard between Mission Accomplished and A Fistful of Energon, Ultra Magnus was able to download a sample of the Decepticon flight protocol (which he explains is unique to Decepticons). Because of the tampering with Starscream's code, Starscream is able to escape from the stasis cuffs (explaining how he was able to escape from Elite Guard captivity in the early moments of A Fistful of Energon).

However, the Elite Guard got the necessary data to create two flying Autobots - Jetfire and Jetstorm. However the powerful new Autobots soon got very cocky in their training, so Ultra Magnus decided to give them a taste of real combat. Perceptor suggested putting them into a combat simulator using Starscream's code to give them a taste of a real fight against a Decepticon. However, Starscream's code proved as tricky as the real thing and quickly overrode the simulation, placing Jetfire and Jetstorm in real trouble, because as long as VR Starscream held the upper hand, the Elite Guard could do nothing to disengage the twins from the simulator. Fortunately, the stress of the battle revealed some new abilities in the twins, not least their ability to fuse into a combined super robot, Safeguard. Shortly after Perceptor was able to regain control over the simulation and abort it, before the twins were seriously hurt.