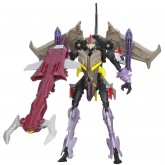 When Predaking returned to the Nemesis speaking of mysterious explosions and the disappearance of Megatron, all optic sensors immediately turned to Starscream. The Air Commander has long coveted the command of the Decepticons. It was obvious to everyone that Starscream must be responsible. Now, he finds himself hunted and alone, cut off from the other Decepticons who believe him to be an assassin. Starscream finds himself where he never thought he'd be-hoping Megatron turns up safe and sound, if only so his name can be cleared.