Limbo, it is a strange world in the twilight said to exist between Heaven and Hell.
"What's going on...where am I?" Starscream recognised the space, in which half-mechanical crude beings wander, as Limbo.
There he noticed many Starscreams from other universes who had arrived the threshold of the world of the dead. Each Starscream was also aware of the others.
One Starscream had his metal metabolism system turned off by Galvatron, who is the new form of Megatron, while the other caused his own destruction when he attempted to merge with Underbase; the huge data mass saved inside planet Cybertron...Many Starscreams gathered there beyond the time and space concepts.
As they compared their stories, they realised each had a different reason for being there. But as if to prove how similar their characters were, they all had incredibly strong attachment to life. Naturally they soon had the same idea; Wouldn't it be possible to go back to life if we all worked together? All Starscreams agreed to this, and each of them even had the same thoughts he kept to himself; "They can be all sacrificed...as long as I can revive, that's what this is all about."
The scientific knowledge many Starscreams had was put to practical use, and they created crystals to reverse spirit from mechanical catalyzer found in Limbo. Each Starscream grabbed a handful of the crystals, piled up to form a hemisphere and giving out yellow-green glow on the ground.
"Let's start", it was unclear which Starscream said this, but it was like a signal for the mayhem that started next. Wanting extra crystals to achieve a more certain result, Starscreams had begun to fight for bigger shares. The half-mechanical crude beings of Limbo scattered to avoid the unusual disturbance.
Finally, the winner had set to take off Limbo with an armful of the crystals. But the next moment, many other Starscreams, who were lying on the ground, got hold of his legs as he had taken off. They were all linked like a rosary in the air. "Damn you all, let me go!", the "winner" Starscream yelled as he threw the crystals into the reactor inside his body. He disappeared from Limbo with other Starscreams, then the next moment his gigantic form appeared among the skyscrapers of the Earthlings.
He was gigantic...his form had become well over 10 meter tall as a result of all Starscreams' obsessions combined into one. Furthermore, each Starscream left small fragments of himself in Limbo because of the fight among themselves, which prevented the complete restoration. His body was half transparent. "Now I am a real ghost..." Starscream was surprised at his own reflection on the windows of a skyscraper.
Oblivious to his thoughts, Cybertron warriors were arriving at the scene. Giant Starscream, the fused form of multiple Starscreams from many dimensions, followed his Destron soldier's instinct and turned his gun to the Cybertrons....! 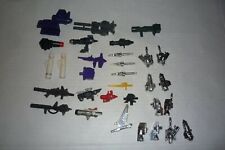 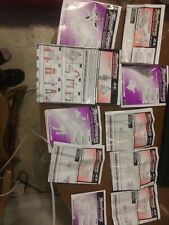 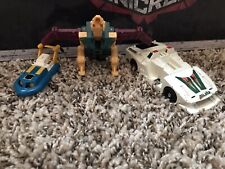