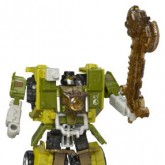 Strongarm is a member of various Cybertron attack groups in both of his appearances, usually serving alongside Skyblast.

At some point before the Movie began, Strongarm was a part of a unit under Ironhide's command who helped to storm a fort and rescue the Autobot Longview.
In the alternate universe "Twilight's Last Gleaming", Strongarm was a part of the force assembled by Arcee to take back the Earth from Megatron, standing by on Earth's moon waiting for the signal to begin operations from Bumblebee and Ironhide.