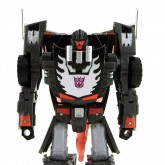 To counter Cybertron's ground force, Destron has been attempting to gather their own car robot army.
They have forcedly taken several earth Super-cars made of extremely strong alloy, and using those as a base, create 5 new powerful worriors. Their name is Stuntrons! True to their nickname, " Super Heavy- weight Smashers", on the road they boast the destructive power unmatched by anyone.
Now, one of the Stuntrons, Wildrider, who specialises in rough combat, launches his single-handed attack on Cybertron base! Roaring his engine he runs through the enemy base. His reckless speeding shows no consideration to anything.
"Take a damn good look at me, you Cybertrons! I'll teach you how to roll!!"
Skilfully avoiding the attack from Cybertrons, he reaches the core of the base and transforms into Robot mode, and without wasting a moment he aims his gun at the computer Teletraan 1, the brain of the base.