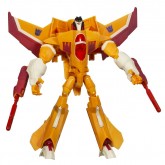 The Suck-Up is extremely proud to have been given the same color scheme as Sunstorm, a background character from the Generation 1 cartoon later released as a repaint of Generation 1 Starscream by E Hobby (and subsequently, many more repaints of Starscream).

Since I wrote that, a toy of the Suck-Up clone was made, and given the name Sunstorm! - Sol