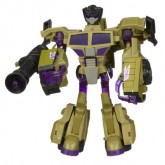 Swindle's dialog in both his cartoon appearance and his comic appearance is littered with references to various weapons and locations from Transformers mythology. Here is a list of those references for the curious:

Swindle mentions the Vok of Nexus Zero. The Vok were an alien race in Beast Wars, who caused lots of trouble for the Maximals and Predacons of that series including trying to wipe out the whole planet and abducting Maximals Tigatron and Airazor, who were later fused by the Vok into a super-powerful Transformer named Tigerhawk.
Nexus Zero was the home of the Vok, a nebula in deep space.

Swindle makes reference to the Quintessons of Quintessa, a reference to the five faced aliens from Generation 1. He refers to them as good traders with a ready supply of oil.
Nebulos also gets a reference as having a nice beach to retire to, with supremely smooth Energon. Nebulos, in Generation 1, was the home of the Nebulans, who were the partners of the various Headmaster, Powermaster and Targetmaster Transformers of the later years of Generation 1.

In his comic appearance, Swindle makes many references to different weapons and places as he sells increasingly powerful weapons to Blitzwing and Lugnut:

- Andellorian Anti-Gravity Cannon - Andellor was an advanced planet from the short-lived 3-D Transformers comics by Blackthrone. The Anti-Gravity Cannon has an equally obscure background - it came from a "find your fate" book. Another anti-gravity cannon was used by Skullcruncher in one of the Generation 1 comics.

- Glass gas and a huge bat - Although not named in the story, the gas' effect is very similar to the signature glass gas weapon employed by Generation 1 Cliffjumper to weaken his opponent's armor.

- Talosian Triple Crusher Cannon - The Talosian part of the name might be a reference to Talos Four, a planet mentioned in the backstory of the Transformers Collector's Club Astrotrain in the text story "The Dark Heart of Sandokan". It could also be a reference to the planet from the original pilot episode of Star Trek.
A Triple Crusher Cannon was wielded by the Generation 1 Seacon Nautilator.

- Omega Bomb - In the third season Generation 1 episode "The Quintesson Journal", the Quintessons tried to sell planet-destroying Omega Bombs to a pair of worlds who had been at war for generations.

- Nemesis Shield - The Nemesis Shield is a reference to one of three powerful weapons that Optimus Prime receives on the final level of the Playstation 2 Transformers Armada video game when he fights against Unicron (along with the Matrix Cannon and Vanguard Booster).

- Planet Dahros (and its infamous northern hemisphere with surly locals, watered down Energon and lousy service) - Planet Darhos was one of the many alien worlds visited during the run of the Japanese Headmasters series. In spite of the different spelling, it is the same planet - as the northern hemisphere is generally not a pleasant place to visit in that series, either! 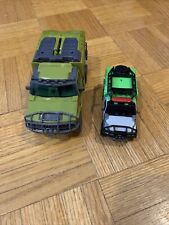 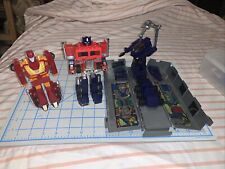 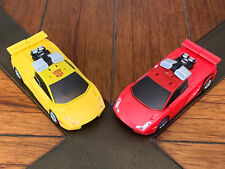