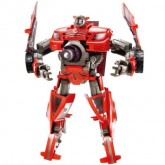 Swindle is based off of a drone in the Transformers Movie video game. In the game, he is one of the most common enemies, as well as one of the few who is vulnerable to your guns. He generally only takes a couple of hits to be defeated.

In the Titan UK story, "Prelude: Ironhide", Swindle is seen briefly as a Decepticon in charge of a fort where the Autobot Longview is being held prisoner. He surrenders after Ironhide's team breaks into the fort, rather than be scrapped.

In the alternate universe shown in "Twilight's Last Gleaming", Swindle is a guard at the Decepticon bunker in Denver where Optimus Prime is being held in cryogenic stasis. He's quickly and easily defeated by Bumblebee.